So I really didn’t plan on leaving it this long before posting again, but that’s just how life goes! So when I last left you it was three weeks ago and I had just got my wig. Safe to say I have worn it all of once since then!

So the following day to my last blog post I was admitted onto the ward in order to start my new chemotherapy regime. Seven nights in total I was in before they let me go home, and six of these days involved chemo drugs. It was awful. Totally awful. The first and second days of chemo I didn’t feel too bad, in fact, I felt pretty good, these were different drugs to the previous round and I thought that perhaps they wouldn’t have much of an effect on me. I was very wrong. The first day involved just one drug called rituximab, which I have had before and is what they call a monoclonal antibody. In simple terms, it labels a protein on the cancer cells and forces my own antibodies to attack the cancer. The second day involved a new batch of drugs and these ones are the real chemo drugs, the stuff labelled ‘cytotoxic’ which literally means toxic to living cells 😬. It was a full-on schedule with three different drugs repeated at different intervals for the next four days. I’ve never felt so sick before.

The third day of chemo I couldn’t keep any food down (not that I even felt like eating anything) and I slept pretty much all day. Days four, five and six were not much better, they pumped me full of anti-sickness which didn’t really help much and just made me so woozy and dizzy that I couldn’t sit up even if I wanted to eat. When they admitted me on the Tuesday night onto the ward, I weighed 52kg (8 stone 2 pounds) – I had already lost weight up to this point albeit slowly over months, just a side effect of lymphoma. When I left hospital on the following Tuesday I weighed 48.8kg (7 stone 9 pounds). This is a whole stone lighter than my healthy normal weight and when you’re only 5 foot 5 7 stone 9 is not a good look. Skeletal is not sexy. After a week of lying in bed and hardly eating, on top of six days of toxic chemicals being pumped into my body, I struggled to stand up in the bathroom in the hospital long enough to wash my hands after using the toilet and I would have rush the five steps back to bed to lie down again. Feeling that weak, and totally exhausted and sick is horrible. The hospital is pretty big, and the Haematology ward is on the third floor, so a wheelchair was very needed to get me back to the car and home!

My first day home I spent the entire day on the sofa. I still felt pretty sick and nauseous but it was so nice to be home. I mistakenly thought that I had gotten over the worst for the time being until the next round in a few weeks. I was wrong again. So the type of chemo that I am getting requires intrathecal injections, which is when they inject chemo drugs into the cerebrospinal fluid via a lumbar puncture. Now, I had already had one a few weeks ago, and it had gone down relatively painlessly. That wasn’t the case this time. The doctor tasked with carrying it out struggled, due to my anatomy and lack of flexibility in my spine, and ended up asking my consultant to come and do it after a few tries, which was a bit of a nerve-wracking experience, but once done it was all fine. The first time you have a lumbar puncture they make sure that you lie down for at least four hours afterwards and that you drink lots, so as to avoid getting what they call a ‘low-pressure headache’, and then with subsequent lumbar punctures most people are fine lying down for just one hour. Not me (obviously). I lay down for an hour and then slowly sat up thinking ‘oh this’ll be fine’. It wasn’t. A few steps down the hall on the way back to the car and I had the worst most blinding headache I’ve ever experienced. Think of the worst hangover headache times a million. An hours journey back to home in the car where I couldn’t even open my eyes because of the light and had to be driven in silence, followed by violently throwing up once home, and then I spent the next few days not even able to sit up or stand at all. Not enjoyable in the slightest. The headache lasted ten days in total before it went. I’m not sure which was worse, the sickness and nausea from the IV chemo or the blinding headache from the lumbar puncture.

Two days after the lumbar puncture I felt a little strange during the day, not unwell, just a bit cold and shivery. I had a friend over to visit (hey Emma my love, thanks for coming! 😘) and then in the evening when I did one of my many daily temperature checks discovered I had a temperature of 38.2°C!!! 😧 One phone call to the haematology ward, one phone call to 999, an ambulance ride to the hospital (still have the headache here remember 🤮), six hours in a&e having IV antibiotics, one attack of the rigors (which is like the most violent shivering you can imagine), one chest x-ray and eventually at 8:30am admittance onto a ward. When you have chemotherapy it impairs the body’s ability to create new blood cells. I’ve talked about one type of blood cell before, the neutrophil, that helps the body fight off infection. So when your blood counts drop, and you catch some kind of infection it is VERY dangerous and they call it neutropenic sepsis, which hospitals take VERY seriously, hence the ambulance and immediate IV antibiotics.

As well as my neutrophil counts dropping, so too did my platelet and haemoglobin counts, meaning that I had my first blood transfusions. I was given two units of red blood cells and one unit of platelets. I’ve never been so appreciative of people that are able and willing to give blood – a massive thank you to all of you! 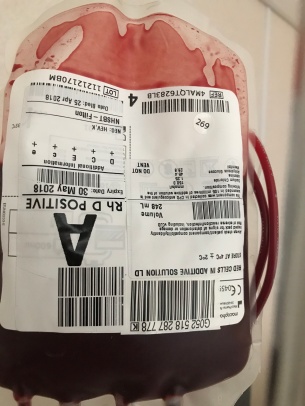 From blood tests, they discovered that the infection was in my Hickman line, something I am told is very common because it is a foreign object in the body, and that the infection was caused by a type of bacteria that is penicillin resistant, so they changed the antibiotics I was on, which I then had an allergic reaction to 😂. I mean if something is going to happen it will happen to me… My consultants then decided that the best thing to do would be to take the line out, to completely remove the source of infection. Again, this should have been a relatively easy process; with the line having only been in my body for three weeks they had presumed that it wouldn’t have taken too much and would more or less just pull out… Nope! An hour and three different members of staff later it was out and the following day I was allowed to go home with a weeks supply of antibiotics. That was six days in the hospital that I really could have done without because I’ve been home three days and tomorrow they’re fitting me with a new line and admitting me afterwards onto the ward for the next round! I know that the sooner this is all done, the better, but I would liked a few more days in the sun!

View all posts by lucy_v_lymphoma